It’s been quite a month starting with me falling off a set of steps and injuring my shoulder, an operation needed on my sons leg, ending with the sudden passing of my father this week.

This has obviously had an effect on what we have been doing here over the past few weeks but hopefully we can get back to some kind of normality soon.

My Father (Mick) was never one to feel sorry for himself and wouldn’t want any fuss at this time, let alone any sympathy for himself or for his kids. Life was something that should be enjoyed and celebrated and he wanted to stick around for as long as possible.

To those who knew my father and those who didn’t, he was an interesting character and the original founder of Tooltique way back in 1977. He always reminded me of his first day selling tools on a Sunday market where he had £3 takings and his pitch for the day cost £4. To add more insult to this, during that first day he heard a little boy say to his mum he needed a pee and heard her response ‘to go do it behind all that rubbish over there’, yes, you guessed right, it was my father’s stall! But this was typical of his attitude, where most would just give up and he was back out on another market the following day and returned his first modest profit.

Prior to this he had worked his way up to being a sales manager of a well know window company, which accounts  to why he was always so quick witted and having a sharp mind. However he used to say although this job was highly paid it left him with an empty feeling and highly stressed. He decided to quit his job once it affected his marriage to my mother and was one of the factors instrumental in facilitating his wandering eye! Yes in his younger days he was certainly a ladies man which helped him spend everything he earned and much more!

I’d like to say my father was a saint but the reality was quite different, a loveable rogue with bags of charisma.

So why did he get into old tools? Well, he had plenty of pub friends and one of them was a well known market trader here in Norwich and over a pint the subject of old tools was mentioned. His friend knew someone else with a new tool stall who had mentioned many tradesmen were saying why can’t they make tools like they used to.

So with no further to do he set about his shed, asked a few friends if they had any old tools they didn’t need and quickly started trading, without any knowledge or anyone to copy or ask advice on things. Brave, bordering on madness I’d say but having grown up in the countryside he’d seen his father sharpening shears etc and he though he would soon learn what was needed. He started Tooltique in 1977 with £20 he borrowed, he had to buy stock and an old van out of that! I remember how slow and cold the old van was and how it struggled with a head wind and hills, it was a huge shock to us kids who were more familiar with his prior vehicle being a Jag!

Fast forward a few years and he eventually built the business which had its own shop here in Norwich. Things became difficult for him in the late 1990’s but only because he thought he’d found a new calling in running a pub, this turned out to be hard on his next relationship and of cause his wallet. One of his remarks he used a lot was ‘all around the pee pot to find the handle’, this was very appropriate when he returned back into trading in old tools. However the Tooltique business never reached its previous heights probably due to the fact he was a lot older and didn’t have the same energy. He retired from the tool business around 2006 wanting to spend more time with his passion of watching sport. He loved his football, Norwich City to be more precise, speedway and his Cricket being amongst his favourites.

Fast forward to 2014 when I brought back the Tooltique business, his interest was sparked again and was a shoulder I could rely on in the background, we didn’t always agree and I was determined to bring my skills from my career into it and have built what is here today. I like to think he enjoyed the ride of his final 6 years although I’m sure if he had it his way he would have like to be involved a bit more.

My father was always a strong willed person, sometimes unshakable in his opinion and always demanded of me to be a better version of himself. I am thankful for the man I have become as a result and haven’t had to live in his shadow for many years now, which must mean he did a good job, although may I add a little unconventionally.

My father will be missed here on a personal level and his legacy of Tooltique lives on. 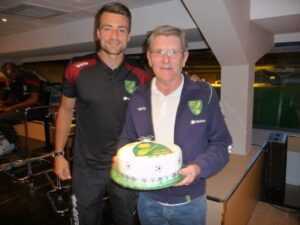